Angst - A Game of Urban Survival! 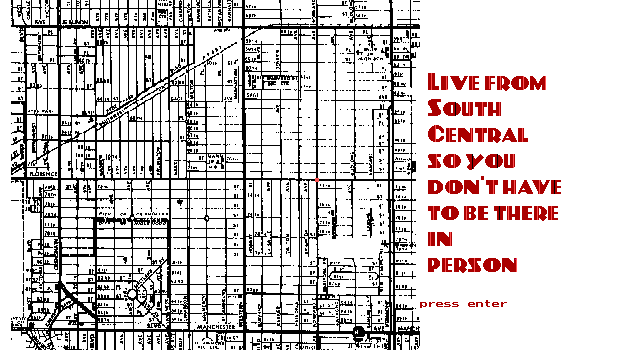 Angst - A Game of Urban Survival!

Angst: A Game Of Urban Survival is a single player, shareware adventure game based on the Los Angeles riots of 1992.

The game uses a DOS Window to frame and run the game. The player starts the game and is shown a scene which puts the player on a motorway junction outside the city. They then use the menu bar to select an attitude with which to approach the scene and an item, attitudes range from Conservative to Green while the items range from an uzi to a breath mint.
The player then enables their mouse and clicks on the picture, anywhere that is coloured yellow is a link to something, sometimes the link does not do a great deal, for example in 'The Fun Zone' clicking on another character brings up a message "You refrain from romance because you do not know your partner's antibody status". Other hot spots though open up other scenes and this is how the player progresses through the game.

What is the point of the game? Who knows? The game's documentation is deliberately enigmatic saying only:
" Object of Game : Up to you to determine. Characters and scenes may give you a hint"
but the manual also makes it clear that it is possible to win, that it is also possible to die, and it is possible to get stuck by not possessing the right item in the right place.